I was asked the other day if being a witch was ‘difficult’.  I replied, with “do you find it hard being a Christian?”,  strangely enough they left me alone after that 😉 but it made me think about how I see my life and how witchcraft ties in with it. 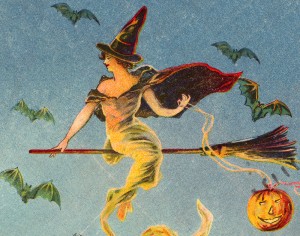 I don’t actively try to ‘be’ a witch because it is just part of me, so for that part at least it is not hard at all.  However, the prejudice can be.  In this day and age, you would think that people would have got over the whole ‘you must be a devil worshipper’ outlook but alas no.

I don’t wear particularly gothy type clothes (ok, I admit, I used to, but not any more, my rather rotund figure doesn’t allow for it! lol), I don’t wear witchy make up or anything like that so if you were just looking at me you wouldn’t really know. I don’t have a big neon sign strapped to my head with saying WITCH or a tattoo on my forehead saying PAGAN or HEATHEN- I really am just ‘me’.

I don’t tell everyone.  Not because I’m worried,  it’s just that I either can’t be arsed or (depending on the person) it’s none of their bloody business!

The other day, my eldest hurt her arm during PE at school and the school rang me and asked if I could pick her up and take her to the local hospital to make sure it wasn’t broken.   We got to the minor injuries desk at the hospital and they went through the admission form and of course they said ‘religion?’.  I said ‘Witch’ and then the receptionist just said ‘Riiiiight’ and then sniggered.   Would they have given the same reaction if I had said Catholic or Christian?  I doubt it.

I have also had people alert the police, yes you heard me, the police, saying that I am a danger to society because I am a witch.  The police were amazing (I cannot praise them enough!), they came to my house, sat down, had a cup of tea and a giggle and said “you have nothing to worry about, you know what people are like, they are just sheep and if others do not follow then they become worried”. I jest you not, that is exactly what was said. They even shook my hand and said it was a pleasure to meet a real witch. Bless them! 🙂

So yes sometimes being a witch is difficult.  Not the actual ‘being a witch’ part, but other people’s perceptions.   I maybe a witch, but I am still human…..and relatively normal 😉

8 thoughts on “Is being a Witch…’difficult’?”

WE ARE TEMPORARILY CLOSED

WE HAVE A SHOP UPDATE REGARDING CORONAVIRUS – PLEASE READ THIS HERE

THIS IS AN URGENT UPDATE PLEASE READ IT

By continuing to use the site, you agree to the use of cookies. more information